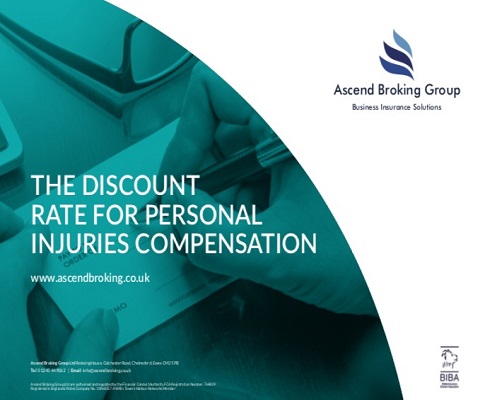 Admin 0 comments
The government has intimated that they will soften their stance on the announcement in March 2017 regarding how large personal injury claims are calculated. Back in March, large claim calculations had a provision built in that there would be no investment return on lump sum payments and infact the settlement would reduce by 0.75% each year – this made a huge impact to the actual settlement insurers had to fund. Find out more here. The new rate is likely to fall within the range of 0% to 1% (based on current market conditions) rather than -0.75% so it is a significant movement. However, nothing has been confirmed at the present moment in time so any claim calculations will still have to use the new calculation method that caused such unrest across the market earlier this year.

There are three key changes 1. The Ogden rate will be based on “low risk” rather than “very low risk” investments Insurers are likely to welcome this important change of principle. This better reflects how claimants have actually been investing their compensation awards. 2. More regular review of the Ogden rate, at least every three years A system of regular review will hopefully help with forward planning. However, a lot depends on whether the rate will be linked to market indicators, allowing movements to be partially foreseen and potentially hedged with an effective investment strategy. If instead there is still a strong political element to the decision, things will be far less predictable. 3. Introduction of an expert panel to help the Lord Chancellor in reviewing the Ogden rate Insurers will want to know who will be represented on this panel and what its remit will be. Will it focus purely on economic factors or also cover policy issues? And will its findings be made public, providing greater clarity, or will they be for ministers’ eyes only? Pricing strategy Insurers will be considering whether to take confidence from the recent announcement and make pre-emptive rate reductions, stealing a march on the competition. They will want to balance this against the remaining uncertainties. A 1% rate would be largely in line with how large claims are settling currently (notwithstanding the official -0.75% rate). But a 0% rate would represent an genuine increase in claims costs. We prepared a guidance note earlier in the year that you can download here. We will update this if the new claims calculations methods come into force – until then, nothing has changed and you should consider your present limits of liability that you purchase. To find out more on the subject or how we can help you please contact one of our consultants on 01245 449 061 info@ascendbroking.co.uk