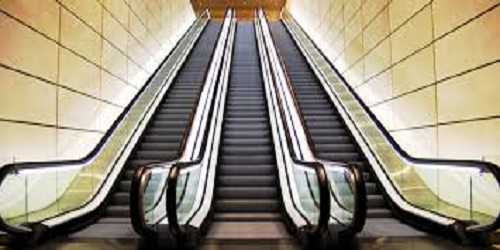 Escalators: Staying a step ahead in health and safety

There was great excitement among architects in 2011 when Jack Levy, professor of mechanical engineering at City University London, unveiled his plans for the world’s first curved escalator – the ‘Levytator’. Promoted as both safer and more energy efficient compared to standard escalators, some hailed the ‘Levytator’ as a benchmark in the future of escalator design. However, seven years on, it seems plans for the ‘Levytator’ failed to make it off the ground.

Escalators and moving walkways are encountered frequently in daily life, from the London Underground to airports and shopping centres. Little has changed in terms of the design since the late 19th century when the first ever ‘incline elevator’ was installed at Coney Island in New York City. However, this means that many of the risks associated with using elevators persist today. Escalators and moving walks are constructed using motor drives, gearboxes, braking systems, chains and step sections, among many other components. They operate through the use of two chains on either side of the escalator, which pull stairs in a continuous cycle. Once the stairs ‘disappear’ beneath the ground, they continue to loop back on themselves until they reach the top. An electric motor drives the gearing which maintains a relative speed between the handrail and the moving staircase. The average speed of an escalator is between 0.3 and 0.6 metres per second; whilst not breakneck speed, there’s still a very real possibility of an accident occurring if sufficient care is not taken. Bystanders were horrified in 2015 when passengers tripped and toppled down an escalator in a Cardiff department store and knocked over a lady in her 80s, who later died from her injuries. No mechanical failings were found to have caused the incident. To find out about our industry sectors click here USER ERROR If used properly, escalators are an effective and efficient way of transporting large numbers of people. However, they are also subject to misuse, whether intentional or unintentional. The moment of mounting and dismounting escalators is when the majority of accidents occur. Distracted passengers, caught by surprise upon reaching the end of the escalator can trip and fall, sustaining injury to themselves and others. Some in a hurry, attempt to run down the escalator and subsequently take a tumble in their attempt. Even hesitancy can lead to an accident, when a tentative ‘stepper’ blocks those behind or changes their mind at the last minute and tries to turn around unsuccessfully. Other hazards include shoes and clothing which can become entangled in the ‘skirt’ or side panels of the moving walkway, trapping limbs and crushing fingers and toes. Then there’s failure of the machinery itself. A famous case is the explosion of a London Underground escalator in 1987 which led to outbreak of fire in the ticketing hall, killing 31 people. This was attributed to lint and grease which had accumulated in the mechanism of the machine. Since then, a number of safety features have been added to the basic design, including emergency stop buttons and deflector brushes, which facilitate safe operation by deflecting passengers from the skirt panels. MAINTENANCE AND INSPECTION – LEGAL REQUIREMENTS Given the potential for accidents, it’s vital to take measures which keep escalators and moving walks in optimum working order. All new escalators and moving walkways must comply with The Supply of Machinery (Safety) Regulations 2008, which ensure only safe machinery is put into service in any premises. Further, section 9 of The Workplace (Health, Safety and Welfare) Regulations 1992 stipulates that escalators and moving walkways must “function safely; be equipped with any necessary safety devices [and] be fitted with one or more emergency stop controls.” There’s also a need for routine maintenance and thorough inspection. Owners of premises where escalators are in operation have a duty of care to ensure the machinery is properly maintained by a ‘Competent Person’; that it is regularly inspected (normally every six months); and that any identified defects are rectified as soon as possible. In the case of a serious defect, the escalator or moving walk should be removed from operation immediately. Company owners can face penalties where this is not followed. This was demonstrated in 2015 when the managing agent for a Nottingham shopping centre was fined £125,000 for a health and safety breach. A faulty escalator with a missing section had caused a man irreparably to damage his big toe. The managing agent admitted failure in properly maintaining the machinery. A ‘Competent Person’ is identified as someone with the necessary skills, qualifications and experience to identify existing and predictable defects related to the machinery being inspected. They must determine whether the equipment is fit for continued use, up to the next inspection. Escalators installed in the workplace are subject to a number of regulations, including the Management of Health & Safety at Work Regulations and the Provision & Use of Work Equipment Regulations (PUWER). Any business owner must meet obligations which require them to keep up to date with any changes in legislation, standards and codes of practice which might affect their escalator. The Safety Assessment Federation (SAFed) has also published guidelines for the safe operation of escalators and moving walks. Use our free advice service THE FUTURE OF ESCALATORS Despite having retained a similar design for 125 years, there have been on-going attempts to innovate around the basic escalator model. Some blueprints claim to address health and safety issues whilst others seem purely to be experiments in the weird and wonderful. In 1993, a spiral escalator was discovered under rubble at Holloway Road station in the London Underground; since then a Shanghai shopping mall installed seven-story spiral escalators, built by Mitsubishi of Japan. Efforts have even been made in the area of sanitation. Electronics company LG has created an escalator accessory, the ‘Handrail UV Sterilizer”, which is installed on the front of the handrail and sends benign UV rays to kill germs. And Rombout Labs has ‘gone a step further’ with its invention of the ‘Vertiwalk’ – a ‘smart staircase’ method of transporting humans between floors without the need for a power supply. Whatever the future of escalators and moving walkways may be, it’s clear that company and business owners must continue to ensure they keep in step with health and safety requirements, to minimise risk and reduce the chance of injury. Source: Allianz Insurance plc If you have any queries please contact us on 01245 449060