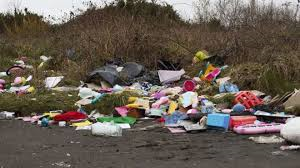 The insurance implications of Britain becoming a nation of fly-tippers

Britain’s landscape is becoming increasingly tainted by the blight of fly-tipping – an escalating issue which puts farmers and private landowners under particular strain and which has the potential to bring about their financial ruin.

In June 2017, a House of Commons briefing paper recognised the scale of the criminal activity surrounding the illegal disposal of household, industrial, commercial and other ‘controlled’ waste, by those without a Waste Management Licence. Materials dumped often include asbestos, solvents, oil, fridges, highly combustible materials and tyres, and the practise of fly- tipping is often carried out by organised criminal gangs. Although penalties can be applied under Section 33 of the Environmental Protection Act 1990, under the terms of which the courts have the right to impose a prison sentence of up to five years, street-wise fly-tippers are often never caught. Alarm bells should sound for private landowners, as the law makes it crystal clear that the responsibility for the ‘clean-up’ of fly-tipped waste, and the cost of that exercise, lies at their door. Councils will not clear land free-of-charge, which results in heavy expenses for the private landowners left to deal with the problem and to foot the bill. Reimbursement would only come about if the guilty party were caught and prosecuted and, even then, exacting the full costs from the offenders could be difficult. Should the dumped waste contain pollutants which seep into the ground, the clean-up operation could well go beyond the means of the individual landowner, potentially bringing about financial ruin. Find out about insurance for Property Owners The cost of removing fly-tipped waste is already believed to cost Britain’s private landowners £50m to £150m a year. Any area of accessible land could be chosen as a dumping ground for waste and those obliged to provide access, under the Countryside & Rights of Way Act 2000, are particularly vulnerable. High-risk sites are also those which are disused or home to vacant warehouses. Others are chosen because previously dumped waste has not been removed, or because factors such as graffiti and ill-repair make the site seem a justifiable target for fly-tippers. Accompanying fly-tipping come trespass, vandalism and illegal squatting, potentially bring more problems for any landowner. Under the Defective Premises Act 1972, and the Occupiers Liability Act 1984, property owners have a duty of care to protect anyone who enters a vacant building. Should the intruder or legitimate visitor suffer an injury, the landowner could be held responsible. Whilst this situation should spur all private landowners into securing sites with locks, physical barriers, CCTV and even security patrols, they would also be well-advised to examine their property insurance policy and assess what protection it provides, if any, to mitigate the costs of dealing with fly-tipped waste. Such protection would typically be an extension to a property insurance policy. Other extensions could cover the eviction of any unauthorised occupants, and/or reimbursement of the security costs incurred when trying to secure a site temporarily, following damage. The landowner whose business relies on having access to their site and buildings, should also ensure they have business interruption cover, whilst those who feel particularly vulnerable could enquire about Environment Impairment Liability protection. The latter could pick up some of the cost of a pollutant clean-up that involves the Environment Agency, but even this protection tends to cover only buildings, rather than offering reimbursement for costs that relate to land and water pollution. If you are a private landowner, it would pay for you to discuss this. So, please get in touch with us and help us to guide you through the different options available.